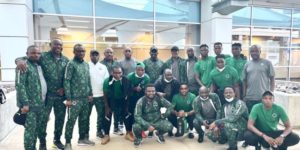 Super Eagles assistant captain, William Troost-Ekong has described the presence of home-based players in the national team camp in the United States as a great development.

It was amazing to meet the new coach and the new coaching crew. Training was good and it’s also great to see there’s a lot of home-based players here as well who have the chance to show themselves. Everyone is in good spirit, we are waiting for one or two more late arrivals and prepare for the game against Mexico.”

Ekong scored the Super Eagles’ equaliser from the spot against Ghana but it wasn’t enough for the team to book a place to the Qatar World Cup.

The Watford defender said it’s been tough for them as it is for other Nigerians.

“It’s a tough few months for us all. It’s a big heartache. We have to keep it moving. When you fall down, you have to stand up again and this team has done it before, we’ll do it again. We will start with these friendly games and a chance to play at the AFCON qualifiers in the next two weeks. That’ll be a great chance for us to refresh and reset ourselves and focus on the next AFCON.”

Ekong thanked the fans and encouraged them to stay behind the team despite the heartbreak of missing out on the World Cup.