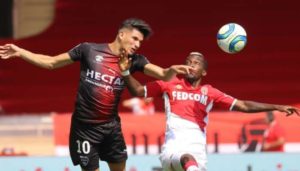 Sofiane Diop opened the scoring for Monaco in the fifth minute but his effort was cancelled out by Ludovic Blas a minute after the hour mark.

Simon was on parade from start to finish alongside Mali’s Charles Traore but the Super Eagles attacker could still not open his goal account in the 2020-21 campaign.

The result was Nantes’ first loss in Ligue 1 after three games this season and they sit 10th on the table while Monaco lead the pack with seven points after three games, level on points with second-placed Rennes and third-placed Lille.

Onyekuru has played in every one of the Monegasques’ games this season and he has an assist to his name as he awaits his maiden goal in the 2020-21 season.

After spending the second half of the 2019-20 season on loan in the Turkish Super Lig with Galatasaray, the former Everton winger is eager to make a statement in Niko Kovac’s team this term.

The 23-year-old moved to the Principality on a five-year-deal last summer from Goodison Park and he made four Ligue 1 appearances in his debut campaign.

Onyekuru will be looking to help Monaco extend their three-game unbeaten streak when they visit Rennes on September 19 while Simon’s Nantes host Saint-Etienne at Stade de la Beaujoire next Sunday.