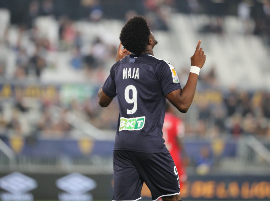 With the game just eight minutes old at the Stade Matmut-Atlantique, Samuel set up his compatriot with an in swinging cross from the right channel which the striker glanced home for the opener.

It was Maja's second goal in all competitions this season, and his first since scoring in a 1-1 draw against Montpellier back in August.

The result ensured Paulo Sousa's team ended their two-game winless run as they prepare to take on Nantes in their crucial topflight game on Sunday.

Nigeria manager Gernot Rohr will undoubtedly be pleased with such decisive and telepathic combination between the two even as he prepares his squad list for next month's AFCON qualifiers.