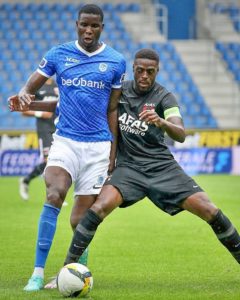 The two Nigerian stars, dessers and Onuachu  were in action in the Smurfs pre-season clash against the Dutch side, but it was the former Heracles man that starred in the match

Cyriel Dessers outshined his international compatriot Paul Onuachu as he scored Genk’s goal in the 1-1 draw against Az Alkmaar on Wednesday.

Both players featured in the clash despite the rumours surrounding Onuachu’s future. The former Midtjylland started the match while Dessers was a second-half substitute.

The match lacked quality, and it looked like there would be no goals until Dessers popped up in the 80th minute to give Genk the lead.

It appeared to be the winner, but Thijs Oosting slotted home in the added minute to salvage a draw for the Dutch team.

Nonetheless, it’s a decent performance from Dessers. The former Heracles man was overshadowed by Onuachu last season, but he’ll hope to play a starring role in the new campaign.