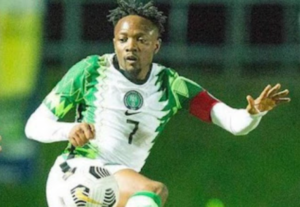 Super Eagles captain and Sivasspor of Turkey winger, Ahmed Musa has paid a courtesy visit to the President of Nigeria Football Federation, Alhaji Ibrahim Musa Gusau, in a bid to chart a new cause and to equally pledge his unalloyed support for his administration in turning around the fortunes of Nigerian football to a whole new level.

Musa, who holds the record of the longest serving Nigerian player with 107 caps to his name, had a fruitful deliberation with Gusau at the headquarters of the NFF on Wednesday.

Subjects of discussion includes, structure of the national team, wages owned players of the national team from the past administration, the Nigeria Professional Football League (NPFL), amongst other pertinent variables that will revive the country's football and return her back to her glory days.

The "Governor" as Ahmed is fondly called by his admirers told journalists that Gusau is new in office and assured the former Zamfara FA chairman will review and reposition every area of concerns, affirming he will meet the yearnings and aspirations of Nigerians, particularly as it concerns the Super Eagles and the NPFL.

"We had alot of talks with him about the Super Eagles and about Nigeria, especially the league"

"I'm always talking about the league because that is where I am coming from, and if we don't improve it, you people cannot be seeing the home based players you people want to see in the Super Eagles"

"Gusau is a new President, we are still going to have an official meeting with him as a team and everything will be sorted out"

new in office, he has to settle down then he will look into his books to know what and what to do" he concluded