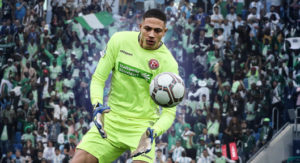 The Sparta Rotterdam goalkeeper who was in goal and made some decent saves for the Super Eagles in both friendlies played in Austria on Friday and Monday respectively.

While accessing the performance of the 19-year-old during an interview session with www.brila.net, Ike Shorunmu said, Maduka possesses the qualities of an elite goalkeeper and looks decent choice for the future.

“He did quite well on goal in both matches,” he said.

“Maduka Okoye is a young boy who still has a lot to learn in the game, but he has shown promises and he can go on to be crucial for Nigeria in the future,” he told brila.net.

Following his brilliant showing, Okoye could be in goal for the 2022 African Cup of Nations qualifiers match with Sierra Leone in November.