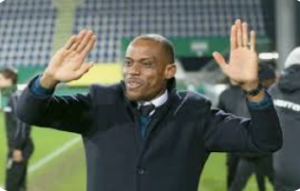 “Yes, Sunday Oliseh will be our new coach. A good 14 days ago we had delicious asparagus at the Straelener Hof,” president of the club Hermann Tecklenburg was quoted as saying by waz.de.

Tecklenburg added, “That was a good conversation. In the last 24 hours we were also able to discuss an employment contract until June 30, 2023. On Wednesday 21 June, Sunday will lead the first practice session. We look forward to working together.”

Oliseh, who penned a one-year contract with the north Rhine-Westphalia-based side in Germany’s fourth-tier division, is thrilled with his latest job.

“I’m happy about the job but I cannot talk at the moment as I’m holding my first training today (Wednesday),” Oliseh told The PUNCH.

He helped Nigeria win Olympic football gold in 1996, played for Dutch giants Ajax from 1997 to 1999, picking up a Dutch Eredivisie and two Dutch Cup titles.

Oliseh, who also played for VFL Bochum and Genk during his club career, earned 63 caps for Nigeria.

He played for his country in two Nations Cup and World Cup tournaments before his exit from international football in 2002.

In July 2015, he became the fourth player from the class of 1994 to manage the Super Eagles after Austin Eguavoen, Samson Siasia and Stephen Keshi.