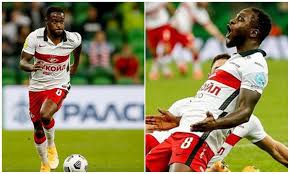 Spartak Moscow manager Domenico Tedesco has revealed how Victor Moses has been a great help to his side since his arrival from Chelsea.

The 30-year-old joined the Red and Whites on a season-long loan from the Blues last summer for his sixth spell away from the Stamford Bridge outfit.

The former Nigeria international has continued to prove his worth at the club, helping them to their current second spot on the league table and now has three goals, setting up four others, including his two assists against Arsenal Tula on Monday.

Moses’ temporary deal is set to expire this summer but the Red and Whites have an option to buy the versatile winger permanently.

Although Tedesco has revealed the business of triggering the forward’s buyout option rests with the club’s financial authority, he has, however, praised the winger’s addition to his side.

"The buyout of Moses is the club's business, I can't give advice. I think his arrival was a very good decision, Victor helped us a lot," Tedesco said, as per, Sport Express.

"In some episodes, it is seen that this is a player of a different class. Today he played a great game, played well both attacking and defensively".

Moses’ performance against Arsenal Tula earned him the man-of-the-match award and has revealed his desire to help Spartak Moscow.

"I try to do everything in my power to help the team. The main thing is that we took three points," Moses told the Match Premier League channel.

"The game was not easy. The field was hard. We showed character, both team and individual, and they deservedly took three points."

Moses will hope to continue his impressive performances when Spartak Moscow take on Khimki in their next league game on May 10.

The winger has been with Chelsea since 2012 when he teamed up with the Premier League side from Wigan Athletic.

He started his career with the Crystal Palace academy before his promotion to the first team, and his dazzling moves and top-notch displays have continued to mark him out for excellence.