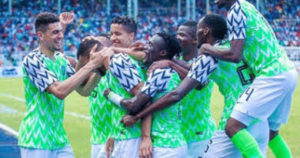 Nigerian international striker Simeon ‘Simy’ Nwankwo could be on his way to Spain after Real Mallorca made an official bid of ₦1.8 billion (€3.5 million) for his services.

Italian clubs Sampdoria, Genoa, Lazio, and Salernitana, were reportedly interested in snapping up Simy, with English Premier League side Tottenham Hotspur also looking to add the Crotone man to their attacking lineup.

But Real Mallorca have overtaken other interested parties by firming up their interest in Simy with a bid that’s worth almost four million euros, according to Diario de Mallorca.

Crotone only paid €850,000 to sign the Super Eagles forward in 2016 from Portuguese side Portimonense. But after an excellent campaign that saw Simy smashed in 20 Serie A goals and became Crotone’s all-time highest goalscorer, the former Gil Vicente man now has an estimated market value of €8 million – the highest of his career.

Simy is 29 and has a contract that expires next year, so Crotone know now is the time to cash in on the club’s hero.

While Crotone suffered relegation back to Serie B last term, moving to Mallorca will offer Simy a return to one of Europe’s major leagues next season.

The Luis García Plaza-led side secured promotion to La Liga last campaign after finishing second in the Segunda Division.