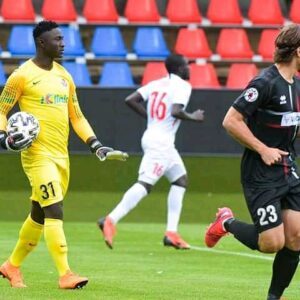 The youngster has reacted after he was handed his maiden invitation to the senior national team for the upcoming games.

The 21-year-old is one of the three shot-stoppers invited by Super Eagles coach Gernot Rohr for their friendlies against Ivory Coast and Tunisia.

The three-time African champions are scheduled to take on the Elephants on October 8 before facing the Carthage Eagles four days later.

“It’s a thing of joy to me, it really shows that I’m really working hard and things are going well,” Yakubu told Brila FM.

“So I will continue to do my best when I go to the camp, work together to achieve the goal and aim [of the country].”

Besides Yakubu, Ventspils’ Dele Alampasu and Sparta Rotterdam’s Maduka Okoye are the other goalkeepers invited for the friendlies.

South Africa-based shot-stopper Daniel Akpeyi is currently Super Eagles first-choice while APOEL FC’s Francis Uzoho and Enyimba’s Ikechukwu Ezenwa have also been regulars in the team. The friendlies have been lined up as part of Nigeria's preparation for the Africa Cup of Nations qualifier against Sierra Leone in November.

The Super Eagles currently lead Group L with six points after securing victories against the Republic of Benin and Lesotho.

Yakubu started his professional career with Clique Sports Academy and teamed up with SKF iClinic Sered in 2019, making his Fortuna Liga debut against FC ViOn Zlate Moravce in July 2020.

The goalkeeper has featured in five league games for the Slovakia side this season, keeping clean sheets against Senica, Ruzomberok and Spartak Trnava.

The young goalie will be expected to feature when Sere take on Trencin in their next league game on Tuesday.

Sere finished ninth last season and Yakubu will hope to help Peter Lerant’s men compete for titles in the 2020-21 campaign.