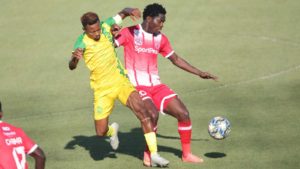 Tanzanian giant Simba made a fine start to their Caf Champions League campaign after securing a 1-0 victory over Plateau United in the first leg of the preliminary round at the New Jos Stadium on Sunday.

Clatous Chama scored the only goal of the game for the visitors 10 minutes into the second half.

As the Nigerian champions, Plateau came into the match with high hopes of profiting from home advantage against the visitors, who appeared in this year's competition as Tanzania's kings.

The Peace Boys made a fine start against the Wekundu wa Msimbazi and almost got an early lead through Dennis Nya but goalkeeper Aishi Manila halted the attempt in the fourth minute.

Three minutes later, the visitors won a freekick on the edge of the box when Isah Ndala brought down Aishi Manila but John Bocco headed the resulting effort from Mohamed Hussein wide.

Simba narrowly escaped after another attack from Plateau as Nya's initial shot and Abba Umar's rebound came off the crossbar.

Simba, on the other hand, came close when Luis Miquissone sent in a fine cross but his teammates could not connect in the 20th minute.

Ten minutes from half-time, Plateau mounted more pressure on the visitors' defence when Uche Onuasonya and Sunday Adetunji found themselves in good positions but both forwards shot wide.

After the break, Plateau coach Abdul Maikaba brought on Ovoke Benard as a replacement for Saheed Jibrin as the hosts aimed to make the best of their promising attacks after a wasteful first half.

Against the run of play, Chama broke the deadlock for Simba, with a rebound after Plateau goalkeeper Adamu Abubakar parried Miquissone's effort into his path in the 54th minute.

In the search for a quick response, Adetunji raced clear on the wing before setting up Abba Umar inside the Simba's area eight minutes later but his finishing left a lot to be desired.

In the 68th minute, Adetunji again made waste of another begging chance as he could not finish the cross from Ibrahim Babawo well.

Plateau continued pilling on the pressure but the Tanzanian giants maintained a tight defence to grind out a massive away win.

With the first leg result in Jos, the reverse fixture will set up another tantalising encounter when the two domestic champions meet at the Benjamin Mkapa National Stadium, Dar es Salaam on December 5.