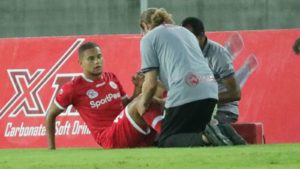 The two giants were drawn to face each other in the competition with Simba playing away in the first leg on November 27 before the return leg is set for December 4 at Benjamin Mkapa Stadium.

The Belgian tactician has now admitted the absence of the Brazilian player, who is nursing a knee injury sustained during the team’s Mainland Premier League match against Biashara United, has forced him to change his plans for the competition completely and start afresh.

“Fraga was in my plans for the Caf competition but unfortunately he is not recovered yet,” Vandenbroeck is quoted by Sokaletu. “He is among the players I wanted to use in the competition because he has the experience to play in the biggest stage and I want to admit his absence has forced me back to the drawing board.

“We will not have him for the two-legged encounter but we are also looking at the other players we have in the squad to see how they can fit in and fill his void.”

In an earlier interview, Vandenbroeck said he has received video clips of their opponents Plateau United of Nigeria ahead of their first meeting.

“I have secured a number of video clips of our Caf opponents, and most of the matches are from last year and what I can say is they are a very good team,” Vandenbroeck is quoted by Sokaletu.

“We must be very careful against them because they are a very strong side and they like playing passing football, the same way we play, they also have very strong strikers, and also apply speed to kills off teams.

“Also at the back, they have very good players, and my strikers must be very bright to beat them, we must try and work on ways to handle them.

“We need to plan well because this season we want to retain the league and also do well in the competition, we want to make another step in Caf competition and that is why I am already studying my opponents.”

Vandenbroeck added: “For us to eliminate them, we must make sure all our departments are working, from goalkeeping, defence to the strike force, we must also have a strong midfield and we will work on that before the first leg battle.”

Simba qualified for Caf for the third straight campaign after winning the 2019/20 title with seven matches to spare and last season, they were eliminated in the preliminary stage by Mozambican champions UD Songo at their own turf when they went down 1-0 in August 2019.