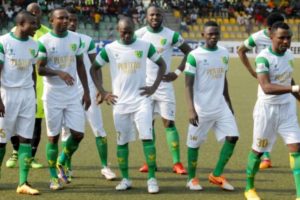 Nigeria Professional Football League (NPFL) side Plateau United have announced 17 players will be released by the club following their disappointing outing last season.

Plateau United, who were the NPFL champions three seasons ago, battled relegation for the better part of the 2018/19 abridged NPFL season; beating the drop on the last day.

The Peace Boys were also eliminated in the Round of 16 of the Federation Cup by Calabar Rovers.

A statement from the club on Friday revealed the decision to dismiss 17 players was taken at the end of a meeting between management and the technical crew.

“All the 17 players have been communicated and told to surrender club properties in their possession as all their entitlements have been paid to them,” part of the club statement read.

Plateau United are billed to commence preparations for the new season in a fortnight and they have confirmed they are already negotiating with new players to replace the departing ones.

Meanwhile, sources have disclosed to newsmen the trio of Sikiru Olatunbosun, Umar Kabiru and Ogene Elisha are reportedly among the players affected by the massive clearout at the Jos-based team.