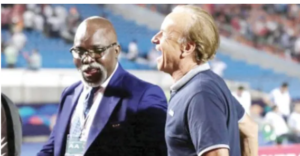 The Ex international tendered his Apology to Amaju pinnick after an interview conducted on his radio station was met with disapproval by the former NFF president. ” Last week, ‘The Big Interview’ debuted on Eagle7 Sports Radio.

It is a program produced and presented by my friend and super journalist, Osasu Obayiuwana.

He is fully responsible for the sports personalities he interviews on the show and the questions he asks them.

It is in that spirit that he interviewed Mr. Gernot Rohr, a former coach who is inconsequential in Nigerian football today, after 5 barren years without a Silverware to show, and most irrelevant now that he has been fired and is earning ‘free’ money for work not done.

After the Interview, last week, Pinnick Amaju reached out to me and expressed disapproval at the conduct of the interview a large part of which, he said, was skewed to disparage his person.

I assured him that was not the case even though I had no hand in the questions Osasu asked him. Osasu was the producer and presenter of the program.

I told him, of course, that Osasu is responsible for the content of the interview and not me.

In a fit of anger, he sent me a mail that was not flattering, to say the least. I understood his pain and forwarded the message to Osasu to let him know just how Amaju felt. How he was not happy.

It was a private message between Amaju and me, and I would never in a million years have taken that as his public reaction to the Interview. If I ever thought so, I would have published it myself and made a cheap point of it.

I discussed it with Osasu and I assumed the matter would die a natural death, only for me to see a publication today on social media quoting from the private and confidential message exchange between Amaju and me, that I forwarded to Osasu.

Amaju is my friend despite our disagreements over Gernot Rohr and the man’s place in the story of Nigerian football. But I would never have used my own opinion to denigrate him in any way.

This publication on social media disclosing my private exchange with Amaju and accusing Gernot Rohr of some misconduct during his stay in Nigeria is uncalled for, and a betrayal of Amaju’s trust in my person. It is totally out of my character and I take full responsibility for abusing his confidence.

I use this opportunity to unreservedly publicly apologize to Amaju Pinnick for whatever ‘harm’ this must have done and may do to him. He does not deserve this treatment at all.

Eagle7 Sports Radio is not meant to fight vendettas, and this is smelling very much like one. I don’t use my position to take cheap shots at anyone. I am truly sorry for betraying Amaju’s trust and hereby apologize for how our private exchange has now turned ‘lethal’.

Meanwhile, the content of that story is not a news item, and I fully understand, as a Nigerian, the context in which some words were expressed. I also publicly apologize to Mr. Gernot Rohr for the embarrassing report”, he wrote.