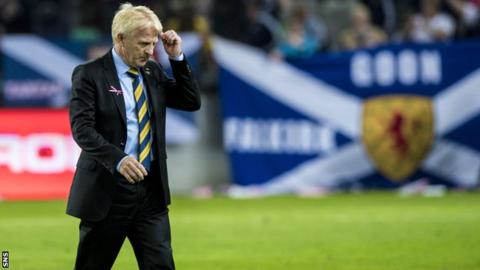 Gordon Strachan has left his position as Scotland manager by "mutual consent".

The decision, taken in conjunction with the Scottish FA board, follows two failed qualification campaigns.

Strachan and his assistant Mark McGhee have stepped down with immediate effect.

"On behalf of the board I would like to thank Gordon for his excellent service to the national team," said Scottish FA chief executive Stewart Regan.

Strachan was appointed Scotland manager in January 2013, succeeding Craig Levein in the role and overseeing the end of the 2014 World Cup qualifying campaign.

The Euro 2016 campaign began brightly but Scotland ultimately fell short of reaching the finals in France. Strachan and the SFA board agreed that he would stay on to lead Scotland in the 2018 World Cup qualifiers, but a 2-2 draw in Slovenia last Sunday ended their hopes of finishing second in Group F and reaching the play-offs.

"I said on my first day as Scotland manager that it was the proudest moment of my career and that I wanted to put a smile back on the nation's face again," Strachan said.

"I share the profound disappointment at missing out on the play-offs, especially having worked so hard to fight our way back into contention.

"The players should receive immense credit for that resilience in coming back from a difficult start and I would like to thank each and every player who has come in to represent their country.

"Together we have shared some really magical moments and those memories will live with me for ever.

"Of course, what made those moments special was the unwavering support of our fans. Through highs and lows you have stayed with the team and my biggest regret is not being able to provide the finals tournament you deserve.

"I would like to thank the board, the backroom staff and everyone at the Scottish FA for the help and support they have given me as national coach. It has been a real privilege."

The SFA board met at Hampden today to discuss the position of Strachan, whose contract was due to end next month. They will now begin the search for a successor.

"I know how disappointed he was that we couldn't secure a play-off place but to come so close was a tribute to the belief he instilled in his squad," Regan said.

"After almost five years the board felt it was time for a new direction to prepare for the Uefa Euro 2020 qualifying campaign and also the forthcoming Uefa Nations League.

"We are grateful to both Gordon and Mark for their efforts and wish them the best of luck in the future."