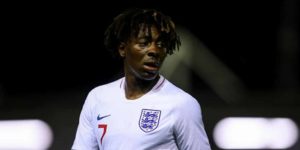 Super Eagles coach Gernot Rohr has praised the qualities of Eberechi Eze, and he hopes the former QPR man will eventually choose Nigeria over England at the international level.

The 22-year-old was born in England and has represented the Three Lions at the youth level. However, he’s still eligible to play for the Nigerian national team through his parents.

Eze has been on Nigeria’s radar for some years and even once trained with the team in 2017. He also met with the President of Nigeria Football Federation (NFF) Amaju Pinnick in 2019 over a potential switch.

The former QPR man is seen as the solution to Nigeria’s long search for the ultimate attacking midfielder. Rohr is aware of this, saying he’s one of the best midfielders in the English top-flight, and he hopes the Eagles star chose Nigeria ahead of England.

Ebere Eze is one of the best offensive midfielders I’ve ever seen in England, and I would like to have him with us,”  Rohr told Elegbete TV.

“But you know that he can also play for England and already played for one team in England.”

Although Rohr would love to have him in the squad, the German tactician said the decision must come from the player himself.

“There is a process to do, at first, the boy must accept himself, and the decision must come from him, from his parents, from his own.

The former Bordeaux manager added that he could only try to woo him with what the team is trying to achieve, which was he did with players like Ola Aina and Kevin Akpoguma.

“In this letter, he has to write to FIFA that he wants to switch and to play for Nigeria, this would be wonderful, but I know that we cannot force his decision and he can only take it himself.

Eze had always asked to be given time to make his decision, and Rohr said the youngster’s position has not changed after sending him a message.

“I sent him a message, and in this message, I showed the interest Nigeria have to get him in this team, so he replied, and he said he has to think about it, so it is not the moment to speak too much about it,” the German tactician concluded.