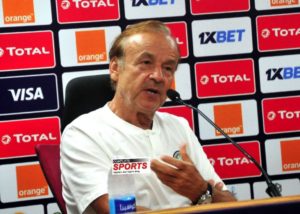 Super Eagles head coach Gernot Rohr has denied reports that he rated Ovie Ejaria better than  Ebere Eze and that he has mandated the Nigeria Football Federation to get the former into his team immediately.

Ejaria and Eze, born by different  Nigerian parents are still eligible to play for the Super Eagles though they have both featured  for England at the U-20 and U-21 levels.

The duo are been courted by the NFF to switch allegiance and feature for the Super Eagles at the senior level.

However, reports emerged recently in some section of the media that Rohr would prefer to have Ejaria in his team  instead of Eze.

The German tactician has however come out to deny the claim in strong terms and insists it is not his tradition to compare players.

“My attention has been drawn to some statements online that I have described Reading FC player Ovie Ejaria as a better player than Queens Park Rangers’ Ebere Eze and so the Nigeria Football Federation(NFF) should get him in the team immediately,”reads a quote credited to Rohr on the official Twitter handle of the NFF on Wednesday.

“This is totally false and very disrespectful to both players. I never compare players and I have not asked the NFF to make any approach for the player in question.

“I will never ask the NFF publicly to approach any player for our team. We have our processes and it certainly doesn’t include sharing such information publicly.

“Furthermore I think there must be restraint in press statements purportedly quoting me and my person in terms of interviews.

“I share a very good relationship with the media in Nigeria but this must not be abused to the extent of misquoting me and making wrong claims about my person.”