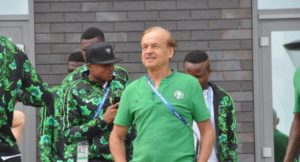 Super Eagles head coach Gernot Rohr has demanded the Super Eagles be efficient for the 2022 World Cup qualifiers after they enjoyed the better statistics, but still fell by the odd goal to Cameroon in a World Cup warm-up Friday night.

“We have to be efficient in the World Cup qualifiers in September,” charged Rohr.

“(Against Cameroon Friday) We had seven shots on goal, when they had only three. They had one on target which resulted on their goal, while we had six on target.

“Our domination was not enough because we had to score in the beginning and we didn’t and when you don’t score, definitely your opponents may get a goal.”

In September, the Eagles will welcome Liberia to Lagos before they face a tricky trip to Cape Verde as the second round of the 2022 World Cup qualifiers get underway.

Rohr insisted the result was the important takeaway from this test match, but the chance to see new players and learn so as to make progress.

What was important was not the result as this was a test game,” he said.

“We have to learn to make progress, to see interesting things and test new players.

“(Terem) Moffi did well, (Abraham) Marcus was good and (Peter) Olayinka was good at the end.

“We will see if they can contest for places in our squad.”