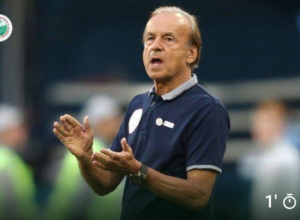 Former Super Eagles Coach Gernot Rohr claims that the Super Eagles’ failure to qualify for the World Cup is due to former Nigeria Football Federation head Amaju Pinnick’s decision to fire him.

The NFF fired the 69-year-old German coach in December after he helped the Super Eagles make it to the World Cup playoffs. Technical director Augustine Eguavoen took over in the meantime.

Under Eguavoen, the two-legged playoff between Nigeria and Ghana put the Black Stars in Qatar because of the away goals rule.

Rohr has now said that if he had been in charge of the Super Eagles during the playoff round, the West African country would have qualified for the global competition that starts on Sunday.

“Pinnick said my dismissal will avert a disaster, but in the end he created the disaster that cost Nigeria the ticket to the World Cup,” Rohr told Eagle7FM Sports Radio in an interview as quoted by Completesports.

“I regret that I did not take my team to win the World Cup, I regret my players will not be at the World Cup even though they deserve to be there. It was not my decision, it was a decision by Pinnick and his board.

“He was punished for this as Nigeria lost the chance to win the Afcon and did not qualify for the World Cup. I hope he takes better decisions now as a member of the Fifa Council.”

Rohr was fired, so he missed the 33rd Africa Cup of Nations, which was held in Cameroon at the beginning of January. Nigeria lost to Tunisia 1-0 in the Round of 16, and didn’t move on to the next round.

On Thursday, the Super Eagles will play a friendly match against Portugal at Jose Alvalade Stadium. Portugal is going to the World Cup.

Please check out some of our other recent news articles if you enjoyed this one: