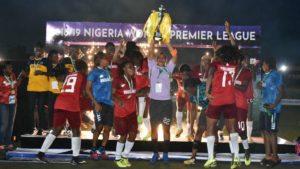 Mantey, Essiful and Acheampong sealed their transfers to the Nigerian champions from Ghana after agreeing to personal terms with Edwin Okon's team, according to the Port Harcourt based club.

Mantey, who secured her first contract abroad, was part of the Black Queens squad for the 2018 and 2014 African Women's Cup of Nations.

On her part, Essiful also featured for the Black Queens at the continent's women's championship in Namibia six years ago.

For Acheampong, the 20-year-old represented Ghana at the 2016 U17 Women's World Cup in Jordan, where she scored twice and later earned her first contract with Turkish outfit Antalyaspor.

The signings underscored Okon's ambition to lead the Jewel of Rivers to another domestic success and subsequent qualification to a maiden continental showpiece which kicks off in 2021.

The Ghanaian trio is expected to team up with the Nigerian side in the coming days and they will be gearing up to follow in the footsteps of Elizabeth Addo, who had previously starred for the club.

Rivers Angels are the defending champions of the Nigerian top-flight following a 1-0 final victory over Confluence Queens in 2019.