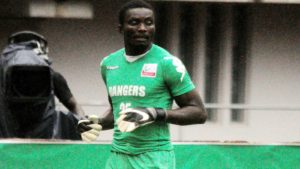 Former Ghana U17 goalkeeper Nana Bonsu has disclosed he is considering making a nationality switch to Nigeria to represent the Super Eagles at senior level.

The 30-year-old shot-stopper has been on the fringes of Ghana's national team owing to fine performances for the Flying Antelopes in the Nigerian Professional Football League (NPFL) and in continental inter-club competitions.

Ahead of the 2019 Africa Cup of Nations in Egypt, he was named in Ghana's provisional squad but was met by disappointment when then Black Stars coach James Kwasi Appiah whittled down his roster to 23.

“Nigeria has been in constant talks with me for the past five years to naturalise for them but I want to take money before I will do that," Bonsu told Asempa FM.

“So if they [Nigeria] agree to pay me some amount of money, I will play for them definitely.

“It’s been five seasons now in Nigeria with marvellous performances yet I don’t get Black Stars opportunities. I was nominated in the SWAG [Sports Writers Association of Ghana] best goalkeepers award last year but I was unable to get a call-up.

"So if I don’t play for the Black Stars it won’t worry me because I am happy with how far the Lord has brought me."

In February 2019, Bonsu told Space FM: “I’m ever ready to be called into the Black Stars because my performance is better. I’m in good shape now."

The goalkeeper, who played for Ashanti Gold during his time in Ghana, recently told local media he has no plans of returning to his homeland in the belief that no club would be able to meet his wage demands.

He rehashes his stance: “In Ghana, Inter Allies is doing well when it comes to player salary. I heard some time ago that [Benin international] Victorien Adebayor earns $2,000 (€1,748) but he is a foreigner.

“When you go to Nigeria, it doesn’t depend on where you are coming from, everybody receives a good salary."

Bonsu represented Ghana at the 2005 Fifa U17 World Cup in Peru where the Black Starlets exited the tournament in the first round after three straight draws.

Last year, he was named the most outstanding goalkeeper of the 2018-19 Caf Confederation Cup group stage.