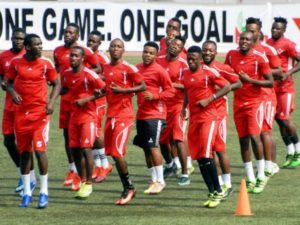 Management of Rangers International F.C have set Sunday, September 13, 2020, as the resumption date for its old and new players for the fast approaching 2020/2021 NPFL season.

Rising from an elaborate meeting held over the zoom platform that had coaches, medical, media and management team in attendance, Monday, at the club’ administrative headquarters, it was agreed that players should be called back to begin preparation in earnest for the coming season.

General Manager and CEO of the multiple league champion, Prince Davidson Owumi, while welcoming officials to the Webinar, urged all to double their efforts in the coming season to help the club actualize its modest target of annexing the league and Aiteo cup to assuage the hunger of millions of the club’ followers around the world.

“Let me say a big welcome to you all as we join hands to push for a great start to the fast-approaching season which will keep us in a vantage position to actualize our target for the season. We are due for a double to appreciate our sports-loving governor, H.E, Rt. Hon. Ifeanyi Ugwuanyi, who has stood by the club in all circumstances. I urge us all to come up with our best at all times for this target to be achieved,” stated the former NPL boss.

Technical adviser to the ‘Flying Antelopes’, Coach Salisu Yusuf, who connected to the meeting from his Kano residence, in his submission described the ended season as one that is filled with mixed feelings but looked forward to the coming season with great optimism.

Coach Salisu, who had earlier submitted his technical report to management, said that with the players retained and the few quality legs that will be joining, he was optimistic of leading the club to greater heights, stressing, “We have a new target before us and I strongly believe that the players we retained and the few coming to join us, we can achieve the set targets.”

Team Doctor, Dr. Wen Udeoji, who also joined via Webinar, said in his submissions, “The medical examinations for the players that reside in Enugu have started and I believe that as soon as the others return, we will have ample time to carry our all the required medical examinations to meet up with the club licensing time frame.”

The meeting resolved that players are expected to hit the players’ camp of the club that is already wearing a new look with the next session of decontamination exercise taking place Tuesday, September 8, 2020.

Team manager of the side, Barrister Amobi Ezeaku, assured that all that was required for the club licensing exercise was being tackled frontally as most of the certifications needed were ready as the club was ahead on time in doing the needful while urging players to keep to the schedule of resumption.

Other officials that made contributions are Chief Patrick Nworji, scouting director and Barrister Ferdinand Ugwuarua, administrative secretary of the club, Barr. Obiora Obunna, Legal Adviser of the club. Twenty-five players made the cut of coach Salisu’ list of retained players while seven quality players are joining from other clubs within and outside the country.