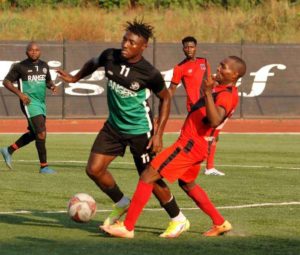 A solitary strike from Reuben Bala off an assist from Elijah Ani in the first half was all that was needed by Rangers International F.C to dispatch hard-fighting Lobi Stars in a pre-season friendly encounter at Awka City Stadium, on Tuesday.

Fielding his best possible squad, coach Abdul Maikaba had Detan Ogundare in goal, Sani Shehu and Philip Clement as wing-backs and the duo of captain, Uche John and David Chimezie in the heart of the defence just as Emmanuel Charles was tasked with the defensive midfield role.

The trio of Ejike Uzoenyi, Michael Ibeh, and Naziru Auwalu took charge of the middle of the pack with Reuben Bala and Elijah Ani tasked with finding the opponent’s net.

The Flying Antelopes should have punished Lobi Stars in the 8th minute with two half chances gone begging for the host as mesmerizing Uzoenyi had supplied his trademark crosses that were missed by his teammates when it should have been easily put behind the goal, with the opponent’s goalkeeper Emmanuel Daniel missing in action.

But, there was no stopping the Flying Antelopes when Naziru Auwalu released a deep penetrating pass that sliced open the visitor’s defence to find Elijah who laid a delicate pass for Reuben to chip the ball over out-rushing Emmanuel Daniel for the only goal of the highly entertaining encounter on 21 minutes.

Opportunities fell for both sides to score more goals in the encounter as stout defending, quality goalkeeping, and some unpardonable misses from the attackers all combined to rob the match of more goals despite the introduction of some fresh legs by the coaches.