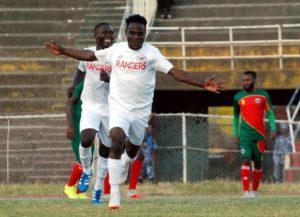 Rangers held their hosts, USM Bel Abbes of Algeria to a 0-0 draw in the first leg of their CAF Confederation Cup, first round tie at the Stade 24 Fevrier 1956, Sidi Bel Abbes on Saturday.

The hosts dominated the game but failed to find a way past Rangers Ghanaian goalkeeper, Nana Bonsu who put up a fine performance in the encounter.

Godwin Aguda who has scored three goals for the Flying Antelopes in the competition this year also came close to adding to his tally on a number of occasions but was unlucky not to hit the target.

Rangers will host the Algerians who are making their debut in the competition in the reverse fixture at the Nnamdi Azikiwe Stadium, Enugu on Sunday, December 23

A win will see the Coal City side progress into the group stage of the competition.

The Flying Antelopes are looking to become the first Nigerian club to win the CAF Confederation Cup.

Two-time African champions, Enyimba made it to the semi-final of the last edition of the competition before bowing out to eventual winners, Raja Casablanca of Morocco.