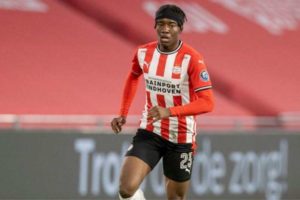 PSV Nigerian striker Noni Madueke says he is not ruling out the possibility of representing Nigeria at senior international level.

Madueke, 18, has made appearances for England at youth level, notably netting four in only six games for the U18s But he is also eligible for Nigeria through his parents.

Nigeria have proved successful in prizing talent away from the Three Lions in the past with Joe Aribo and Alex Iwobi opting to play for the African nation.

And Madueke is open to swapping, he said: “I am only 18 so I have got to be open to everything,” he told SunSport. “If I had a closed mindset I would not be where I am now so for sure I am open to both.

“We just have to see in the future what is best.”

He said learning from Van Nistelrooy is already making a difference as he has four league goals and three assists from only three starts in ten Eredivisie appearances.

He also spearheaded a Europa League comeback with a goal and an assist in PSV’s 3-2 win against PAOK last week and is in line to feature at Granada today (Thursday).

“Ruud helped me a lot last year, taking my game to the next level and now I am just trying to get better every day.

“I have always scored nice goals but I know I needed to score easier ones — being in the right place at the right time — striker-type finishes.

“Ruud has been teaching me how to get into those positions more and, being a Manchester United fan, I know he is the master of that.”

As well as working with Van Nistelrooy, PSV summer signing and 2014 World Cup-winning goalscorer Mario Gotze has also been having an impact on him.

Madueke added: “Mario is a top player and top players rub off on other good players. He has been great with me since signing.

“Him being around, training with us and playing with us is definitely going to improve me.”

Born in Barnet, north London, Madueke got picked up by Spurs age 12 and within three years was U16s captain and featuring for the U18s.