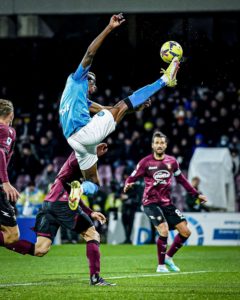 Charles Chibueze Chukwu, popularly known as Crayon, a Manchester United fan asked the Super Eagles striker on social media to come have the big jersey number 9 in his club.

“How my bro! Osi nlaaaa! Man U dey finds you!!! Abeg comes to Man U this summer after you win Serie A! Come collect big 9!!!. “he wrote on his Twitter handle.

Osimhen has been on the radial of the Red Devil but his €150m price tag has been a major part slowing down the deal.

The striker has been in fantastic form for Napoli this season, netting 13 times in 15 league appearances.