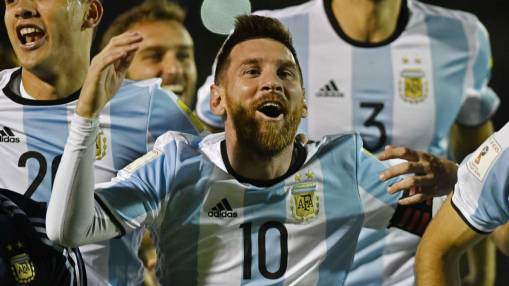 After Ecuador scored in the first minute, Lionel Messi took over and scored three goals to punch Argentina's World Cup ticket. The FC crew debate how much a World Cup should factor into Lionel Messi's standing among the greatest players of all time. Max Bretos and Herculez Gomez evaluate Lionel Messi's impact on Argentina's qualification for the World Cup. Jorge Sampaoli says he gets emotional coaching Lionel Messi, whom he calls the best player in history. U2 front man Bono saluted Lionel Messi following his match winning performance against Ecuador.

While most of those watching the heroic exploits of Lionel Messi were transfixed, at least one member of the audience for Argentina's World Cup-salvaging win over Ecuador struggled to maintain interest.

That man was Tottenham manager (and former Albiceleste international) Mauricio Pochettino, who has admitted that he "fell asleep" before Messi scored a match-winning hat trick to haul his country from the brink of elimination and into the hat for Russia 2018.

Still, the prospect of Argentina's do-or-die clash in Quito wasn't enough to stop Poch from slipping away to the land of nod.

"My wife was angry because my children were watching the game in the room next door, shouting and waking me up.

"I then put the radio on. I didn't know anything about the first goal [for Ecuador] but did hear about the equaliser.

"I watched the highlights the next day."

Despite missing the action, Pochettino admitted he was "delighted" for Messi and for Argentinian football in general.

He also revealed that he had a fairly good excuse for not managing to stay awake to witness the drama unfold.

"I'm a minimum of 12 hours a day in the training centre," the 45-year-old explained.

"I usually get there around 7am and I leave at 7pm or 8pm depending on the day. It's a long day."

Fair enough. The poor guy was absolutely exhausted after a gruelling shift at work.

We can certainly sympathise!

Chris covers the funny side of the game for ESPN FC in the Toe Poke blog.