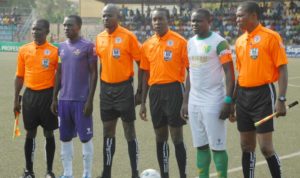 The skipper is unhappy the 2019/20 campaign hasn't started, two weeks after the scheduled starting date

Plateau United captain Elisha Golbe has expressed displeasure with the delay of the start of the NigeriaProfessional Football League (NPFL) 2019/20 season.

The 2019/20 campaign was initially set to resume on Sunday, September 22 but almost two weeks after, there are still huge uncertainties around when the season will actually kick off.

“I was not surprised that the league did not start but I must say, I was very disappointed,” the captain of the Peace Boys told Goal in an exclusive interview.

“I feel by now, Nigeria as a country we ought to have gotten our acts together but that seems not to be the case, I hope the Nigeria Football Federation (NFF) and the League Management Company (LMC) will sort the issues and let us begin the league as soon as possible.”

For Golbe, the inconsistencies in the NPFL calendar, among other things, are counterproductive for the teams campaigning on the continent and also not good for players’ psyche.

“When a player keeps training with no clear date in sight to begin the season, it is not good for their psyche, some players may even peak before the season starts and that is not a good development” the Plateau United skipper noted.

While there is no clear direction as to when the league will actually start, even though there are reports suggesting a possible kick off in October, Golbe stated his team is not taking chances and have been doing their best in getting ready for any eventualities.

“Our preparations have been going on fine, we have actually been winning all our practice games and everyone is getting into shape, the management is trying to get us to play in Ahlan Cup [a preseason tournament], I think that would be very great for us,” Golbe added.

The last 2018/19 NPFL season, which was an abridged format, ended three months ago with Enyimbaemerging champions after the Championship playoffs in Lagos.