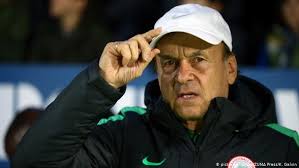 After Nigeria’s AFCON 2022 qualifying 4-4 draw with Sierra Leone and the bad blood that erupted in Super Eagles dressing room, the Nigeria Football Federation (NFF) is believed to be battling to calm frayed nerves ahead of the reverse fixture scheduled for Tuesday in Freetown.

Eagles led the Leone Stars 4-0 before they were forced to an embarrassing 4-4 draw at the first official game at the refurbished Samuel Ogbemudia Stadium in Benin City.

However, sources at the federation revealed at the weekend that some of the senior players and back room staff heaped blames for the lost points at the door steps of the Head Coach of the team, Gernot Rohr due to his questionable substitutions in the second half of the game.

They also accused Rohr of ignoring counsel from senior players and others with good knowledge of the game that very day.

But because of the task ahead in the reverse fixture in Freetown tomorrow, President of the NFF, Amaju Melvin Pinnick was reported to have intervened to quell the ‘mutiny’ in the dressing room.

“(Amaju) Pinnick had to intervene when it looked like some players and coaches were plotting mutiny against Rohr over the way he is handling the team,” observed the source who was at the game in Benin City.

The source pointed out how captain of the team, Ahmed Musa, had to confront Rohr for making bad changes in the course of the game.

Most of the senior players are also believed to be questioning the competence of the German as his understanding of the game against Sierra Leone appeared flawed.

“The Sierra Leonean coach made three changes and those substitutes changed the game. Our own Rohr reduced the effectiveness of our team by some curious substitutions that were ineffective.

“The worst part is that he did not seek any of his coaches opinion before the game. He only wrote some things on a paper and passed to the team’s secretary, Dayo Enebi, who then submitted names for substitutions,” observed the source.

The fears now being expressed is that if Pinnick’s intervention fails to produce the needed balm to soothe frayed nerves in camp, “Nigeria could witness worse performance in Freetown,” quipped the source.

The source also revealed that some of the senior players in the team have started questioning Rohr’s competence, arguing that the German has not been able to lift the team above the 2018 level.

“I have been confronted by some of these players with what they perceive as the poor coaching from the technical crew.

“After the 2-1 loss to Argentina at the World Cup in Russia, Rohr said he had learnt his lessons from that game. But he seems to have learnt nothing.

“Some of the senior players have now decided to play more active part in team selection and management during games since Rohr has shown a glaring lack of capacity to manage the team effectively.

“I am sure that if the late Amodu Shaibu or Stephen Keshi were in charge of the Super Eagles, no team, not even France or Brazil, can force Nigeria to a draw after trailing by 4-0. It is not possible,” conclude the source.