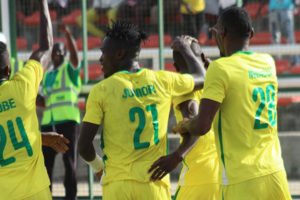 Kano Pillars have returned to the summit of the Nigeria Professional Football League, NPFL, table after they fought back to defeat Enyimba 2-1 in the week 25 match played yesterday at the Ahmadu Bello stadium Kaduna.

The Masu gida' boys now have 48 points from 25 matches played so far and are followed by Akwa United who were forced to a 2-2 draw at Wikki Tourists.

Although the Presidential Task Force on COVID-19 and the Federal Ministry of Sports are yet to lift the ban on spectators at match venues, Kaduna fans in their thousands watched how Pillars battled Enyimba.

Enyimba drew the first blood as early as the 8th minute when Victor Mbaoma caught Pillars central defenders napping as he sneaked in to score with a glancing header.

However, Rabiu Ali restored parity for his team from the spot seven minutes into the second half before debutant Ifeanyi Eze scored the winning goal in the 75th, less than five minutes after his introduction.

At the blow of the final whistle, the enthusiastic fans invaded the pitch as they ran after their heroes without any regards to COVID-19 guidelines.

In other matches, Dakkada FC and Adamawa United suffered home defeats as they fell to the superior power of Lobi Stars and Plateau United 1-0 and 2-0 respectively.

In Aba, Patrick Egeonu gave FC IfeanyiUbah the lead in the 11th minute but Tochukwu Aneyiagu scored an own goal in the 25th minute to leave Abia Warriors off the hook for a 1-1 draw in the 'Oriental derby'.

Elsewhere, Heartland held Rivers United to a 2-2 draw in Okigwe, Wolves devoured Sunshine Stars 2-0 in Ozoro, Katsina United kept their hope of survival alive with a 2-1 win over Nasarawa United just as Rangers and MFM of Lagos settled for a 1-1 draw in Enugu.