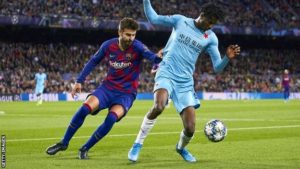 The latest step on Nigeria international Peter Olayinka's remarkable footballing odyssey will see him appear at the Borussia Dortmund's Westfalenstadion for Slavia Prague in the European Champions League.

The 24-year-old has already scored for the Czech champions on his tournament debut in their 1-1 draw away to Inter Milan in September.

He was a permanent threat in a 0-0 draw last month as Slavia Prague became first side to prevent Barcelona from scoring at the Nou Camp since February 2018.

Slavia have two points and will finish fourth in Group F, although they are unbeaten in their away games and the Nigerian is keen to leave another mark on the road.

"We were denied a win at Inter in the last minute and we could've beaten Barcelona at the Nou Camp, so Dortmund provides a big opportunity for us to end on a high," he told BBC Sport.

"Six years ago I was still watching Lionel Messi, Romelu Lukaku, Gerard Pique and Axel Witsel on television in Nigeria, and it's been incredibly surreal playing against them in the Champions League.

"My life has been full of more downs than ups to get here, but I am here now and the past only fuels my desire to keep pushing."

Olayinka's route to a successful professional career has been littered with multiple challenges.

While he can now be spotted in Europe's top football competition he has taken a somewhat nomadic path that has taken him from the poor pitches of Nigeria to San Siro, via Albania, Northern Cyprus and Belgium.

He started his career at amateur club Baba Boss in the south-western state of Oyo, before joining the youth system at Albanian club Bylis Ballsh in 2012, where he experienced his first wintry conditions.

"I had arrived in Albania with my playing boots, hopes and dreams," Olayinka told BBC Sport.

"I knew nothing about the Balkan peninsula, it was freezing cold, I felt so alone and unable to speak the language.

"It was very difficult but my desire to make it in football and Europe kept me warm in my heart because I didn't want to return to Nigeria a failure."

After showing enough promises at the struggling club, he was promoted to the first team where he went on to make 14 appearances and shone in the Cup games.

"At the time I landed in Albania I was playing for the youth side and getting like $100 monthly and it was not even consistent," he explained.

"Payments delay and sometimes it takes some weeks to get it. I was not happy and wanted to earn more. I kept pushing myself because I know Europe was where I wanted to be and I was dedicated and passionate to get my career on track.

"I had expectations from family and friends, but I couldn't meet up to their demands because this $100 was all I had until another payment.

"Life was crazy financially and football wise. But why moan and who do you even complain to? I just wanted to make it outside of Nigeria."

But problems lurks on his return.

In 2014, two years after he arrived in the country at a tender age of 17, he was embroiled in one of the biggest transfer tug-of-wars in Albania football history.

He was the subject of a bitter dispute between two Albanian clubs, FK Kukësi and the reigning champions Skënderbeu Korçë. He was handed a suspension for the transfer troubles.

"The news was all over Albanian TV, with reports that I was kidnapped by officials of another team and taken against my will," he laughs, recalling the time he was the subject of local media frenzy.

"What happened was that one club [Kukësi] thought they had a verbal agreement in place with us during the day, only to find out I had been signed by their rivals [Skënderbeu Korçë] in the middle of the night. It was all messy.

"To think I could barely afford a calling card when I got to the country to being fought over by two clubs proved I was moving in the right direction."

He returned from his ban and produced 19 goals in 44 appearances for KF Skënderbeu which led to a big-money move to Belgian outfit KAA Gent in summer 2016.

Immediately sent out on loan to Czech side Dukla Prague and that successful stints was followed by another with Gent rivals Zulte Waregem.

His involvement in 21 goals in Waregem caught the eyes of Slavia Prague and he made a €3.2m euro from Gent to the Czech capital on a four-year contract.

With rising racist incidents across European football, Olayinka insists that he has never been involved in any racial discrimination in eastern Europe.

"Czech Republic is a lot better because there are more foreigners and the country is a lot friendlier," he confirmed.

"I am speaking the language slowly especially football terms and tactics. The reaction to coloured players has been incredibly nice and I have never experienced racism here or in Albania.

"People say things about other places but I can only speak about what I have experienced - Albania and Czech Republic have been exceptionally supportive of coloured players."

Whatever happens in Dortmund, Olayinka who made his international debut for Nigeria as a late substitute against Brazil in September, is taking in all the positives.

"I can look back now and count the shirts I got from Kwadwo Asamoah in San Siro, at Barcelona and other games," he added.

"These are signs of my involvement in the competition but I still thirst for more success with Slavia Prague."