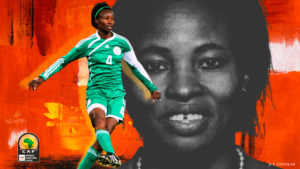 Nigeria’s Super Falcons legend Perpetua Nkwocha, who wrote some of the most beautiful pages of women’s football in Africa, will be in Cairo, Egypt on Wednesday 29 September 2021 for the TotalEnergies CAF Women’s Champions League Draw.

Wednesday's draw will be one giant leap towards the realisation of a project that is aimed at fast tracking development of women's football in Africa.

The draw will be conducted by CAF Director of Competitions Samson Adamu.