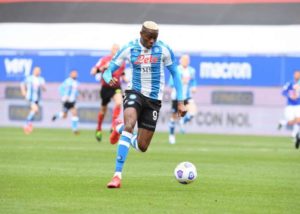 Victor Osimhen grabbed a late goal to seal a 2-0 win for top-four chasing Napoli away to Sampdoria, in the Serie A on Sunday.

It was a return to winning ways for Napoli who lost away to Juventus in their last fixture.

Osimhen scored with three minutes left in the game to put Napoli 2-0 up and guarantee them the three points.

Napoli opened scoring through Fabian in the 35th minute.

They climb into the top-four position in fourth place on 59 points with eight games remaining.

Also, he has netted seven goals in 24 appearances in all competitions for the Serie giants.