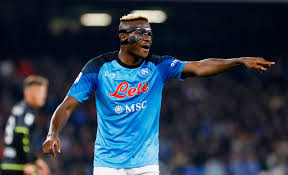 Barely a week after placing a 15 points sanction on Juventus for false transfer gain in the financial books, reports from Italy revealed the prosecutors could be switching their  attention to another big spender in the league, Napoli.

Napoli reportedly paid Lille around €70m for Osimhen, but €20m from that fee was based on the values of a number of players who the Partenopei added to the deal.

Some Partenopei fans are worried their club could be in a similar problem as Juventus and could loose touch league they are could be winning for the first toke in 32 years.

Prosecutor Francesco De Falco, working alongside Assistant Prosecutor Sergio Amato, believes that Napoli may have produced false communications in their financial statements for July 2020 to June 2021, based on that Osimhen transfer.

Should new evidence emerge, sporting proceedings could be reopened against the Partenopei, similar to the situation Juventus are currently dealing with.

Osimhen is having the season go his career with Napoli having netted 13 goals in 15 league appearances this season.