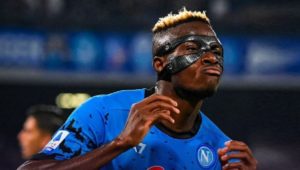 Super Eagles forward Victor Osimhen made sure that Napoli kept hold of their Serie A lead on Sunday with the winning goal in a hard-fought 3-2 victory over Bologna which took their all-competitions winning streak to 10 matches.

Ademola Lookman scored the winner on Saturday to take Atalanta to the Serie A summit but, his compatriot Victor Osimhen changed the story on Sunday.

Victor Osimhen who was subbed in the second half for inform Giacomo Raspadori settled the fixture at the Diego Maradona stadium.

Nigeria native, Joshua Zirkzee, scored the first goal of the game to put Bologna in front but Juan Jesus pulled back for Napoli before halftime.

Napoli went up at the start of the second half through substitute Hirving Lozano, but the lead was short-lived when Alex Meret fumbled a Musa Barrow short.

Victor Osimhen had the chance to restore his side’s lead but his short was blocked, and a few minutes later, he got his goal.