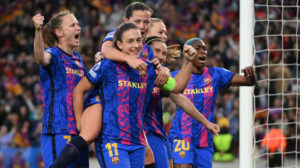 Asisat Oshoala's Barcelona Femeni have been officially kicked out of the Copa de la Reina for fielding an ineligible player in their 9-0 win over Osasuna, Nigeriasoccernet.com can report.

Summer signing Geyse Ferreira featured in the match for Barcelona but had a suspension hanging over her after receiving a red card in the competition last season.

An investigation has since taken place and it’s now been confirmed that the holders are out of this year’s tournament. They have also been fined 1,001 euros and have 10 days to appeal the decision. Osasuna progress to the quarter-finals.

Likewise, Sevilla have also been booted out for a similar offence. The Andalusians used Nagore Calderón in their tie but the midfielder should not have played because of a red card against Tenerife last season.