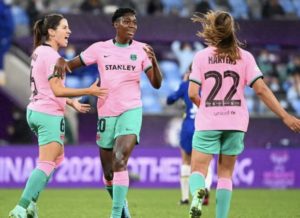 The Nigeria star found the back of the net twice in the second half after the Blaugranes grabbed a 1-0 lead in the first 45 minutes.

Oshoala opened her goal account for the 2021-22 season in the 48th minute and she later wrapped up their victory with another effort, five minutes after the hour-mark.

Jonatan Giraldez’s women have now scored a total of 10 goals in two matches in the Spanish top-flight this campaign which put them at the top of the table.

Oshoala played from start to finish while Equatorial Guinea defender Dorine Chuigoue was also in action for Real Betis who are winless after two outings.

The former Liverpool and Arsenal striker is among the 23 players invited by Nigeria for the six-nation Aisha Buhari Cup that will start from September 15 to September 21 in Lagos.

The Super Falcons are in Group A alongside Morocco and Mali.

The tournament is expected to get Randy Waldrum’s ladies ready for their 2022 Africa Women’s Cup of Nations qualifiers against Ghana in October.

Fifa, meanwhile, have endorsed the tournament in honour of the First Lady of Nigeria.

“In accordance with the article 7 of the regulations, FIFA is happy to provide official authorization for this women’s tier 1 tournament…we hereby remind the participating teams that the Laws of the Game must strictly be applied to these tier-1 matches,” read a letter from Fifa to NFF.

“Finally, we would also like to draw your attention to the contents of FIFA’s circular no.1735 of 1st October 2020. The strict application of the FIFA’s Return to Football – International Match Protocol (IMP), or an equivalent protocol of your confederation compliant with the said Protocol, is required.”