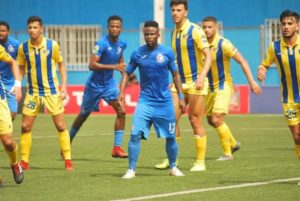 Enyimba head coach Fatai Osho has praised the character of his players after Sunday’s CAF Confederation Cup win against Paradou AC at the Enyimba Stadium.

Stanley Dimgba netted a hat trick and Victor Mbaoma scored his eighth of the season to render Abdelkahar Kadri’s late goal a mere consolation as Enimba ran out 4-1 winners on Sunday.

The result has taken the People’s Elephant to second in group D, heading into the final two matches of the current stage.

Sunday’s win was Osho’s first game in charge of the People Elephant following the departure of Usman Abd’Allah last Monday,

Speaking to the club’s media channel after the fixture, Osho heaped credit to the players’ ability to adapt to new tactics within only a few days.

“The time was never there so we had to (do) a crash program to encompass a lot of things into what we wanted to do, and today we are happy that whatever we were able to do within those four days we were able to get a result with it.

“You could see the manifestation of whatever we have been doing in the training session in their play. It’s not an easy thing to do. We must give credit to those boys (the players) because if they are not ready to learn it will be so hard to teach.

Speaking on what the club could achieve under his watch, Osho stated that the team would take every match as they come.