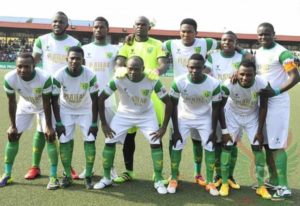 On Sunday, Plateau United were forced to 0-0 draw in Jos by Akwa United paving the way for Lobi Stars who earned a 1-0 win over MFM in Makurdi to move to the top of the table.

The draw with Akwa United was Plateau United's second at home since the 2019/2020 season kicked-off in November 2019.

The first was the 0-0 draw that marked the resurgence of former champions, Kano Pillars.

In a telephone chat with Daily Trust yesterday, Onwuasonaya who joined Plateau United from Kwara United said there is no panic in the camp of the 2017 NPFL champions.

According to him losing the top spot to Lobi Stars is a temporary setback so nobody in Plateau United is losing any sleep.

He also said his team will go all out for the maximum points against Sunshine Stars in Akure in a midweek match while hoping for Lobi Stars to slip in Port-Harcourt against Rivers United.

"We are not worried that Lobi Stars have taken our position on the table. We wanted to remain at the top but our draw against Akwa United caused the setback for us.

"Our plan is to storm back to the top as soon as possible. We shall fight for victory in Akure in order to reclaim the top position in case Rivers United beat Lobi Stars in Port-Harcourt.

"So to answer your question, there is no panic in the camp of Plateau United," he said.

Plateau United have so far won seven, drawn four and lost three matches to amass 25 points, two less than table toppers Lobi Stars of Makurdi who have a game in hand.