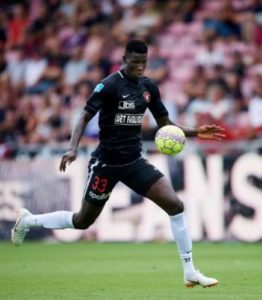 Super Eagles and Genk Striker Paul Onuachu is set to resume training on Friday after recovering from the coronavirus his manager Hannes Wolf confirmed.

Last week, the lanky forward tested positive to Covid-19 on his return from Nigeria to the Luminus Arena ahead of their friendly game against Eendracht Termien, which was subsequently cancelled.

The Super Eagles striker has since been in quarantine but has not fully recovered from the virus and tested negative after another round of test.

Wolf has confirmed the forward can now rejoin the rest of his squad ahead of their clash against Dutch side Excelsior.

“But Friday he [Onuachu] will just train with the group. Paul can also compete against Excelsior on Friday in the exhibition match,” Wolf told Het Nieuws Blad.

Onuachu scored 10 goals and provided two assists in 29 appearances across all competitions to help Genk finish seventh on the Belgian First Division A table last season.

The forward teamed up with the Luminus Arena outfit last summer from Danish side Midtjylland where he spent seven years and bagged 52 goals in 135 league games.

His fine form in front of goal caught the attention of Super Eagles coach Gernot Rohr, who handed him a call-up in March 2019.

The 26-year-old striker made his debut for Nigeria against Egypt in a friendly and has now featured six times for the West Africans.

Onuachu started his career with Ebedei in Nigeria before moving to Europe in 2012 to join Midtjylland youth setup on a scholarship.

The forward will hope to play a prominent role for Genk in their build-up pre-season games to the 2020-21 campaign.