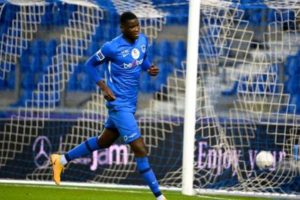 Super Eagles forward Paul Onuachu continues his fine form in the Belgian Jupiler league after scoring for KRC Genk against Kortrijk on Saturday.

With the goal, the Nigerian striker has now scored his 19th league goal of the season from just 18 appearances.

Onuachu’s previous best record was when he netted 18 goals in 36 games for Midtjylland during the 2016-17 Danish Superliga campaign.

The game ended 2-1 in the favor of the Kortrijk’s, but Genk retained their second position on the league table.

Senegal’s Habib Gueye opened the scoring for Kortrijk in the 23rd minute, before Onuachu leveled up four minutes before halftime.

Habib Gueye scored the winner in the 54 minutes to make sure the maximum points remain at the Guldensporen Stadion.