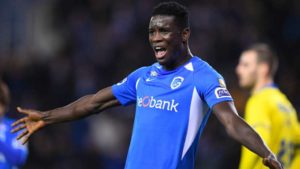 Paul Onuachu scored a hat-trick as Genk started their 2021 with an emphatic 4-1 victory over KAS Eupen in a Belgian First Division A encounter on Wednesday.

Onuachu, who has played in all but one of Genk's league matches this season, extended his lead in the top scorer's chart with 18 goals while his team closed the gap on leaders Club Brugge to a single point.

The 26-year-old restored the visitors' lead at the Kehrwegstadion just before half-time and he later converted two penalties after the restart to secure maximum points.

Nine minutes after grabbing his third goal of the night, the Super Eagles striker was replaced by his compatriot Cyril Dessers as Genk remained unbeaten in their last three outings in the Belgian top-flight.

Dessers, on the other hand, has been limited to a substitute's, role with his last league start dating back to October, but he has scored four goals so far in 14 league appearances.

With his latest heroics, Onuachu is still the leading Nigerian top scorer in Europe and he has equalled his best goalscoring return in a single season, when he scored 18 goals for Midtjylland in the 2016-17 Danish Superliga campaign.