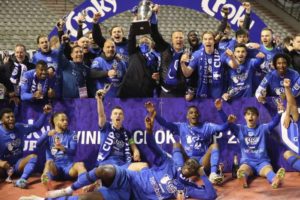 Paul Onuachu and Cyriel Dessers are still in a joyous mood over their club’s remarkable outing in Belgium.

Onuachu who has scored over 31 goals for Genk this season saw actions 90 minutes and provided an assist as Genk edged their opponents 2-1 at King Beaudoin Stadium.

Japanese forward Junya Ito opened the scoring in Brussels, three minutes into the second half, while DR Congo forward Jackson Muleka scored Standard Liege’s only goal of the game in the 84th minute.

Standard Liege finished the match with 10 men after Mali defender Moussa Sissako was dismissed late in the game.