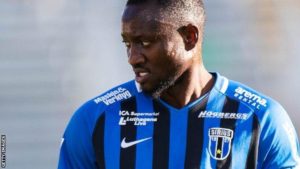 Minister of Youth and Sports Development, Sunday Dare, has insisted that only a win in Freetown will be acceptable to Nigerians when the Super Eagles take on their Sierra Leonean counterparts in the reverse Group L fixture of the 2022 Africa Cup of Nations qualifier on Tuesday.

Super Eagles are scheduled to fly out to Freetown by a chartered private jet this morning at 8am for the reverse fixture.

Dare who was physically present at the game in Benin City expressed shock and disappointment at the team’s unprecedented meltdown and demanded a response in Freetown tomorrow.

“Nigerians have expressed a collective disappointment with the collapse of the team especially in the second half, giving up a 4-0 lead to a team that is ranked 88 times below our biggest football brand, the Super Eagles.

“I have expressed my disappointment with the result to the team and the Nigeria Football Federation. Like most Nigerians, only a convincing win in Freetown can assuage our feelings and bruised egos. Only a win will be acceptable in Freetown,” observed Dare who deferred comments on the suitability or otherwise of Mr Gernot Rohr as manager of the team.

“The task at the moment is to get the team firmly back on track towards picking one of the group’s two tickets on offer for the 2022 AFCON. A win in Freetown will seal Nigeria’s 19th participation in the African mundial.

“After this, we can now debate Mr Rohr’s suitability as we seek to return Nigeria to the pedestal of African football and one of the beautiful game’s power houses in world football.

“We will reappraise Mr Rohr’s performance since he was named as Super Eagles manager and see if he is the right man to fulfil our expectations,” said Dare at the weekend.

The Sports Minister said he is not unaware of the role the domestic league can play in actualising a Super Eagles of our dreams.

“The success of our endeavours in football can only be measured by the success of the domestic league. A thriving, professionally run domestic league in all cadres will impact positively on our national teams. That’s why I demanded a full implementation of FIFA and CAF club licensing regulations before the start of the new NPFL Season.This will bring us closer to making our leagues viable for investors and restore the confidence of all stakeholders.”

In his reaction to the anger generated by the 4-4 draw in Benin City, Rohr said

“Everybody is determined, everybody is vexed, nobody slept,” Rohr said in an interview published on the Super Eagles YouTube channel yesterday.

“So we are doing everything in training and in the meeting we will do, we will see again everything in the video, speak about the mistakes and I’m sure they will react because I know my team, I know what we can do, they showed it in the first half.

If we can maintain the energy for the second half we can do it I know it’s a good team. I think at half-time they believed it’s finished but it was not finished. It is a good lesson to everybody, to the staff, to the players and we have to react.

“I can promise you that we will react, if they will be lucky or not I cannot promise you but they will fight and go there to win the match.”

Rohr said he understands the angry reaction of football fans following the draw in the first-leg, stating it was an unacceptable result.

“If they say they are vexed about the match and the result they are right,” he said. “We are all vexed about it, we cannot accept such result especially when you lead 4-0 and you are 4-1 up at half-time. The first half was one of the best we have had together, so what happened that the team collapsed in the second half? We are now trying to analyse.”