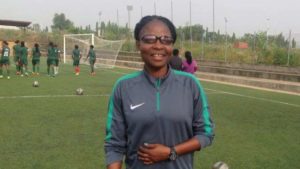 United States-based former Super Falcons handler, Florence Omagbemi, has turned down an offer by the Nigeria Football Federation (NFF) to return to the team’s technical crew.

Omagbemi, who captained the Super Falcons for 16 years, was head coach when the team won the African Women’s Nations Cup trophy at Cameroun 2016.

Her contract was not renewed by the NFF in December that year despite calls by some football loving-Nigerians to the NFF to do so.

A source close to Omagbemi’s family told The Guardian yesterday that the NFF offered the position of an assistant coach to her on Tuesday evening with an order to relocate from the United States to Nigeria immediately.

“Omagbemi told a senior member of her family that she won’t accept the offer,” the source said. “Not that she is not ready to return to coach the team, her complaint was that the order by the NFF that she must relocate from the United States immediately was too harsh. She felt the NFF did not want to give her the job in the first place.”

The source continues: “Omagbemi did not relocate from the U.S. before she led the Super Falcons to win the Women’s Nations Cup title in 2016. When she was appointed assistant coach to Falconets, Omagbemi did not relocate from the United States before she guided the team to the final of FIFA U-20 Women’s World Cup in Japan. So, why giving her such harsh condition when the NFF is not even giving her the position of the chief coach this time?”

The NFF has shortlisted three Americans and two European coaches for the job.Contacted yesterday, NFF President, Amaju Pinnick said the search for the new Super Falcons coach was in the final stages. “We are in final stages, and it will be concluded latest on Friday,” he said.