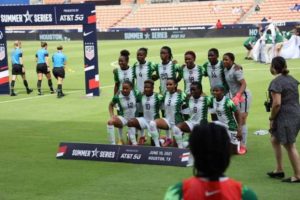 Ex Eagles star Sunday Oliseh has praised the Super Falcons for their fightback which saw them force Portugal to a 3-3 draw, in their second game of the four-nation Summmer Series.

A stoppage time goal by Rasheedat Ajibade saw the Falcons hold the Portuguese to a draw.

The Europeans raced to a 2-0 before the Falcons reduced the deficit late in the first half.

Early in the second half Portugal went 3-1 before the Falcons dragged themselves back in the game scoring two goals.

And reacting to the game, Oliseh wrote on his verified Twitter handle: ”Don’t you just love the change in pace Naija style? Great comeback.”

The Falcons will take on hosts USA in their final game of the tournament on Thursday, 17 June at 2am Nigerian time.