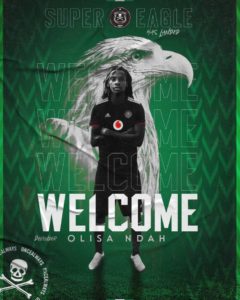 The Mighty Buccanneers announce the capture of the 23-year-old on their official website on Wednesday.

Speaking about the signings, Orlando Pirates administrator Floyd Mbele said: “We are proud to announce the signings of Olisa and Kwame.”

“I would like to personally thank both Akwa United and King Faisal Football Club for the professional manner that they handled these transactions.”

Ndah put pen to paper on a three-year deal that will see him stay with the former South Africa Premier Soccer League champions until the summer of 2024.

One of the standout performers of the recently concluded Nigeria Professional Football League, Ndah was a mainstay at the heart of the defence for Akwa United as the Promise Keepers romped to their first-ever league title.

Ndah’s excellent showings on the domestic scene also earned the former U-23 star a call-up to the Super Eagles a few weeks ago. The former Remo Stars defender featured for the Nigerian team that suffered a heavy 4-0 defeat to Mexico in July.