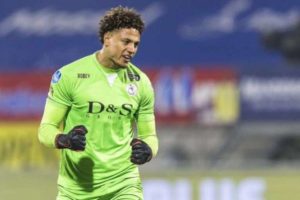 Maduka Okoye will be looking to keep a third clean sheet in his fifth Dutch Eredivisie game of the season tonight when Sparta Rotterdam host FC Emmen at the Sparta Stadion.

Okoye since making his league debut against Heerenveen on November 1, has gone ahead to feature in four matches from which he has so far been able to secure two clean sheets.

The Nigeria international has also been on the winning side on two occasions in those four games while losing the other two, the last one a 1-0 defeat to PSV Eindhoven.

Sparta play host to Emmen on Friday evening with the opportunity to move into the top half of the Eredivisie standings while also hoping to bounce back from the loss to PSV.

Sparta are just four points clear of the relegation zone, but easy wins over RKC Waalwijk and ADO Den Haag have given them hope of enjoying a comfortable season in mid-table.

Even in defeat to PSV last time out, Sparta showed that they were an improving side after their resolve was eventually only broken by a 78th-minute Donyell Malen goal.

While their defensive performances were an issue at the beginning of the campaign, De Kasteelheren [The Castle Lords] appear to have now turned a corner with that side of their game with Okoye.