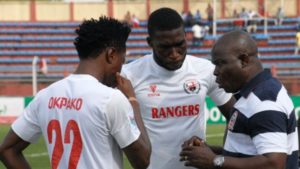 Gbenga Ogunbote has penned a new one year contract with Nigeria Professional Football League outfit, Enugu Rangers putting an end to speculation over his future.

Ogunbote linked up with the Flying Antelopes from oriental rivals, Enyimba last season and led the club to win the Aiteo Federation Cup last week.

The Enugu club trailed 3-0 at a point in the game before rallying back to win 4-2 on penalties.

It was the Coal City club first Federation Cup title since 1983 and the sixth in total.

There were rumours that Ogunbote who has handled clubs like Sunshine Stars and Shooting Stars in the Nigerian top flight could be set to leave the club, but talks about his future has now been laid to rest after he signed the new contract.

“Rangers Management Corporation, owners of Rangers International F.C, have extended the contract of Aiteo Cup winning coach, Olugbenga Ogunbote for another season,” the club tweeted on their official Twitter handle on Tuesday.

Ogunbote will now lead Rangers to the 2019 CAF Confederation Cup, a title which has remain elusive for Nigerian clubs.