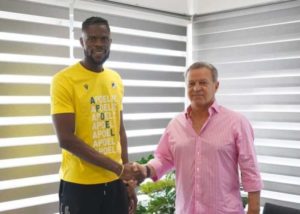 Uzoho was on loan from Deportivo de La Coruña, as a goalkeeper

He started his career from Africa when he joined the Senegal branch of Aspire Academy in 2013, at aged 14; initially a forward, he was converted into a goalkeeper after being deemed “too slow” at the age of 12.

In 2016, after impressing on a tournament in Barcelona, he joined Deportivo de La Coruña’s Juvenil squad.

Age rules meant that Uzoho could only become available to sign a contract with Dépor in January 2017; shortly after signing his contract, he started to train with the first team. Promoted to the reserve team ahead of the 2017–18 season, he made his senior debut on 10 September by starting in a 3–0 Segunda División B home win against Real Madrid Castilla.

Uzoho made his first-team – and La Liga – debut on 15 October 2017, starting in a 0–0 away draw against SD Eibar. At the age of 18 years and 352 days, he became the youngest ever foreign goalkeeper to debut in La Liga, and the second-youngest player to appear in the league during the campaign, only behind Real Madrid’s Achraf Hakimi.

On 24 August 2018, Uzoho renewed his contract for three seasons and was immediately loaned to the Segunda División side Elche CF for one year. In February 2019 he moved on loan to Cypriot club Anorthosis Famagusta, in the search for more first-team football in the run-up to the 2019 Africa Cup of Nations.

After making his debut for the club, concerns were raised about his health certificate. As a result, Anorthosis Famagusta were deducted 9 points, which they appealed. The club’s deduction appeal was rejected, although Uzoho’s appeal against his personal penalty of a one-match ban and €1,000 fine was successful.

In July 2019 he returned on loan to Cyprus, this time with Omonia. He said he hoped his return to the country would be positive.

Uzoho represented Nigeria under-17s at the 2013 FIFA U-17 World Cup. Aged only 14, he was an immediate backup to Dele Alampasu.

In October 2017 Uzoho received his first call-up to the Nigerian senior squad. He made his full international debut on 14 November, replacing Daniel Akpeyi in a 4–2 friendly win against Argentina.

He was named in Nigeria’s 23-man squad for the 2018 FIFA World Cup in Russia. By that time he was considered Nigeria’s first-choice goalkeeper.

He withdrew from the national squad in November 2018 due to injury. He was a squad member at the 2019 Africa Cup of Nations. Uzoho was in goal for Nigeria in the 3rd place match against Tunisia.

In October 2019 he suffered a ligament injury in a friendly match against Brazil and underwent surgery in November 2010.